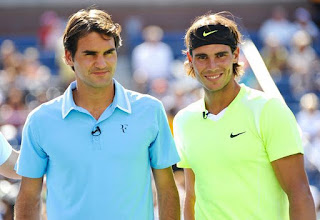 Wimbledon, starring Kirsten Dunst and Paul Bettany came out in 2004, right before I really started following tennis. This rom-com tells the story of budding tennis star Lizzie and the should-be-retired former star of the male circuit Peter. An expected encounter between the two gives Peter new hope that he may stand a chance at the title this year. Sparks fly, much to the dismay of Lizzie’s father as she is neglecting her practice. The usual communication problems occur, as with any romantic comedy flick, and Peter finds himself in the finals. He confesses his love for her during an interview, Lizzie returns says all is forgiven; Peter wins his title, proposes to her which (of course) she accepts. They have two children (a boy and a girl of course) and watch them play tennis at their new home. It’s all a little fairy taleish for me. In fact, there are very few tennis couples on the ATP or WTA circuit, and none of them have met like that.

I’ve been an avid follower of tennis since I was 16, the same year that my high school decided to hold tryouts for the school tennis team. I’ve played badminton since I was about 9, and I figured the two were pretty similar (the lines on the court, serving cross-court, etc). The racquet is substantially heavier than my 30 gram badminton racquet. A tennis ball actually comes into contact with the court before you hit it as well, unlike a badminton birdie. I made the school team, and went on to place 4th at Regionals.

Roger Federer was number one in the world at that time and even those people, who are not huge fans, cannot help but admire certain qualities of his. He is a great athlete. Anyone who is able to stay in the top ten in the world in their sport is in remarkable shape. Federer is now 30 years old, and is still 4th in the world. He has great sportsmanship and has won the Laureaus sportsman of the year award over Tiger Woods and other great athletes multiple times. Born in Switzerland, Federer is fluent in English, French and High German. As a person who loves languages, I find this admirable. He has won every Grand Slam (Wimbledon, French Open, US Open and the Australian Open) at least once. As if there wasn’t enough to admire, he is also a family man now, marrying his long-time girlfriend Mirka Vavrinec and having twin girls. Federer was my favourite player for nearly a year until I stumbled across the likes of Rafael Nadal. Their rivalry has been one of the best on the ATP circuit, and although they meet in the finals often, they are good friends.

I have been smitten with the Spanish tennis star for over 6 years. Anyone who knows anything about me can attest to this. One look in my bedroom and I suppose it’s pretty obvious: every wall is adorned with posters, pictures of him and one wall even has the Spanish flag. I have his Vamos Rafa ball cap, a “Got Nadal?” t-shirt, and a copy of his biography which I have read cover-to-cover. I suppose initially I liked him because of his looks, but over the years his talent is undisputable. He has won the French Open six times in the last seven years (earning him the nickname “King of Clay”), won the gold medal at the 2008 Olympics and completed his career grand slam in 2010 by winning the US Open at the age of 24. Currently ranked 2nd in the world after Serbian Novak Djokovic, Rafa is without a doubt my favourite athlete. There’s really nothing that’s not to like: he’s humble, he’s talented, he’s Spanish (and has the most gorgeous accent in interviews) and he’s a philanthropist. I actually got to see him play live at the Roger’s Cup in Toronto in August 2010, a small stop on the ATP circuit. I wound up getting tickets to one of the semi-finals and luck was on my side apparently. Though he wound up getting beaten by Andy Murray, the entire game was so surreal. I WAS IN THE SAME BUILDING AS RAFAEL NADAL! I took dozens of pictures as you can imagine; probably the best day of that entire year.

Back to couples on the tennis circuits…as I mentioned before, it doesn’t really happen. Most couples are from different walks of life, and if they do happen to meet through tennis, one of them has usually already retired. A relationship of two active players is not likely to work, as both circuits have their own schedules and destinations for tournaments. Roger Federer’s wife Mirka was a tennis player too – they met at the 2000 Sydney Olympics but she soon retired due to injury. Andre Agassi and Steffi Graf are another tennis couple – meeting after they won their respective titles at the 1999 French Open, but Graf retired a few months later and she continued to support him in his career. For those of you who have not done so yet, I encourage you to read Open by Andre Agassi. I really didn’t know much about Agassi, as he took his retirement in 2007, just as I was really getting into the sport. Even if you don’t follow tennis as closely as I do, it is an engaging, at times disturbing and eye-opening account of the life of one of the greatest tennis players in the Open Era.