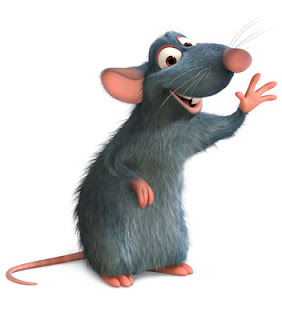 The adorable animated film starring the rat Remy as an aspiring chef in Paris has completely stolen my heart. This is largely because it combines three of my favourite things in life – animals, food and France. Remy and his rat family are so gosh darn cute I wanted to reach through the screen and move them into my house. The entire film revolves around cooking and the restaurant industry so of course it made me hungry. Along with other French recipes, Ratatouille will be something I attempt throughout this month. The fact that the movie takes place in Paris, France is just the icing on the cake for me. I’m a sucker for anything French (as those of you who read my previous Julie and Julia blog would already know). The story of a little rat who wants to be something greater and do something that is different from the rest of his family I believe is relatable to many. “Two roads diverged in a wood. And I, I took the one less traveled by and that has made all the difference” is a quote by my favourite poet Robert Frost.

Being different and going against the grain can often be difficult but it will make you memorable. I myself have never really been known to blend in with the crowd. I have often taken part in things that are not really considered cool but I really couldn’t care less. In high school I would have definitely been characterized as a nerd. I had a 93% average upon graduation; I played badminton and tennis (which were not cool sports like volleyball or rugby) and was the captain of the school’s trivia team. It was only when I left home at 18 that I was really able to explore who I was and who I wanted to be. I know that at the root of who I am is that nerd. Physically I have changed since I finished high school; a few more piercings and tattoos as well as several dye jobs. But really, at the core of it all is still the driven, academic and compassionate person I always was.

The story of Linguini figuring out his identity as the son of the great chef Gusteau falls back again to the search all of us go through, trying to determine our role in the grand scheme of life and the struggles we endure trying to resolve the identity crisis. We really do guess our way through life, how many times do we really know for sure that the decisions we are making are correct? We make over 100 decisions every day, from deciding what time to wake up, to what we’re going to eat for breakfast, to whether we’re going to actually go to the gym after putting it off for a week.

Deciding what you want to study in college/university and what career path you’re going to follow is one of the largest and most difficult decisions that I (along with my fellow students) was confronted with at a pretty young age. It is a major decision to make when you are 17/ 18 years old and to be honest I don’t know a single person who can say with absolute certainty that they know for sure what they want to be. What you think you want changes all the time.

During Grade 11 I was positive that I wanted to be a General Practitioner (doctor), and wound up taking Biology, Chemistry, Physics and Math courses. Although I did well in them, I didn’t enjoy them anywhere as much as I thought I would, so I took that to be a clear sign that I wasn’t headed down the right path. I did a complete 180 degree turn, from the science field towards the linguistic/languages domain when I actually applied to university. Now finished my degree, I don’t regret for a second pursuing the subject I did. Having a degree in French is nothing but an asset in Canada where it is the second official language. I will be headed to teacher’s college next September hopefully and the job prospects for French teachers are very promising. I am super excited for what the future holds. The past will forever be a part of your present as well your future.
Posted by Britney at 3:22 AM