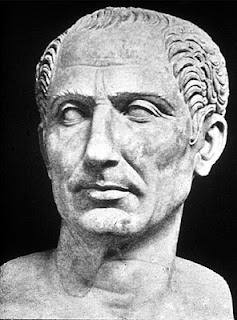 I never have fully understood what draws people to any given interest. Since Grade 8, the history of the Roman Empire has completely fascinated me, most specifically the period of time revolving around Julius Caesar. Caesar was truly a remarkable character from what I’ve read in multiple history books and also the myth built around him. He and his heir Octavius can be held responsible for the transformation of Rome from a republic to a monarchy. The roman statesman and general was born into a wealthy family and quickly gained notoriety on the battlefield with his conquests in Gaul which extended the borders of the empire (during which he wrote his own accounts of his victories) and his political manoeuvres. He, along with Pompey and Crassus formed the first triumvirate in 60BC. With the death of Crassus at the hands of the Parthians, the relationship between the two remaining men became strained and a power struggle began. Pompey who held power in the senate was forced to take up arms when Caesar crossed the Rubicon with his troops, resulting in civil war. Caesar’s power was unrivalled and he assumed his authority over the entirety of the empire. He was declared emperor for life, though his dictatorship was cut short by a group of senators who conspired to have him murdered in the Senate. Even in death, Caesar’s legacy remains; the Russian word tsar and German word kaiser both take their meaning from the root of caesar. We still use the Julian calendar, and the month of July (my birth month) is named after Caesar himself. I’m not entirely certain how Caesar salad got its name, but it is yet another example of something that bears the name of the Roman emperor.

Ridley Scott’s Gladiator takes place long after the assassination of Caesar on the Ides of March, during the reign of Marcus Aurelius, the last of the “Five Good Emperors”. Aurelius was not murdered by his son like in the film. However, the film accurately portrayed the eccentricities of his son Commodus, from his extreme paranoia to his desire to be a gladiator and be worshipped by the masses. He was an egotist (who thought of himself as a demigod and had several statues created depicting himself as Hercules) with neurotic tendencies and his rule as Emperor was highly criticized. Commodus was not politically nor military savvy which resulted in multiple conspiracies and attempted coups by other members of the administration. He participated and put on lavish gladiatorial shows in an attempt to remain popular with the people, but this did not win him much praise. He charged the people outrageous amounts to see him appear in the arena and would slaughter hundreds exotic animals. Commodus was eventually poisoned and strangled in his bath by those closest to him.

The character of Maximus (Russell Crowe) is based on several military men in Rome and gladiators of that time period but never existed as a historical figure. Gladiators in Rome did achieve celebrity status after winning battles and in a way can be viewed like movie stars today. They drew large crowds and were the objects of desire of many women, who would sneak into the lodgings of the gladiators after hours to have rendezvous’. The movie, which came out in 2000, not surprisingly won the Best Film Oscar. It was relatively historically accurate and the story of good triumphing over evil is always a crowd pleaser. Maximus did eventually get his vengeance for the slaughter of his wife and son, succeeding in killing Commodus and joining his loved ones in the afterlife. The movie is visually stunning, and the immensity of the Coliseum is overwhelming. I have every intention of visiting Italy at some point to see the ruins of the Roman Empire. It is remarkable that remnants of this iconic period still remain standing to this day.

Though there are hundreds of historical sources pertaining to the Roman Empire, written by philosophers and thinkers of the time, many people still have the typical images of Rome in their heads. Eating grapes while lying on lounge chairs, with servants fanning them, all wearing togas with a crown of laurel leaves is often the first image conjured up. I took a Roman civilization course in university, which was a combination of the history and culture of the empire, starting with the founders of Rome (Romulus and Remus) to the fall of the empire with the evasions of the Germanic tribes and eventual sack of Rome. It was an interesting and enlightening history of one of the greatest periods in human history. Not to mention my professor was amazing. Part of one class was dedicated to showing us how to properly put on a toga (which is far more difficult than you might think). We covered things from all the different types of gladiators there were, to the interesting fact that many of the “bad” emperor’s names start with the letter “C”: Caracalla, Commodus and Caligula. I think I only missed one class all semester just because it was so interesting. I love learning new things. Though I was not a history major, much can be learned from the mistakes of the past – not just in the world but in our personal lives.