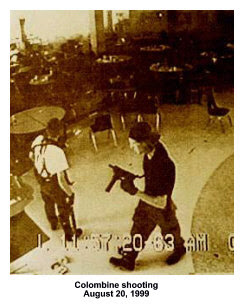 Bowling for Columbine was the making of director, producer and writer Michael Moore (same man who brought us Fahrenheit 9/11 and Sicko). The focus of the film is the prevalence of guns in American culture, focusing on gun violence and youth; the easy access that anyone has to these deadly weapons and the need to enforce gun control laws. The title references the tragedy at Columbine High School in April 1999, where Eric Harris and Dylan Klebold went on a shooting spree, killing a dozen students and injuring dozens of others with stray bullets. While violence occurs in other countries, the number of gun-related deaths in the United States is ten times greater than any of the other countries mentioned. For those of you who haven’t seen Chris Rock’s stand-up skit about gun control should check it out: http://www.youtube.com/watch?v=OuX-nFmL0II

The whole Columbine incident has fascinated me for a number of years. I’ve watched a couple documentaries on it and read a book that came out about a year ago: Columbine by Dave Cullen. In fact, any criminal activity, namely serial killers have mystified and intrigued me for a long time. What possesses people to commit these horrendous acts against other human beings? What makes these individuals tick and how can they possibly think that doing those horrible things is ok? I have never taken a psychology course and I’m no expert in the field but I have read piles of serial killer biographies and the whole field of criminal psychology really peaks my interest. As I consider myself a “normal” person with a conscience and morals, the factors that shaped these people’s lives must have been monumental in their development as young adults and also later in their lives. My life is still being written and only within the last couple of years (and several hours of psychotherapy) have I realized that events in your childhood definitely wire you the way you are.

I have read the biographies of: John Wayne Gacy, Jeffrey Dahmer, Richard Ramirez, Gary Ridgeway, Aileen Wournos, Andrei Chikatilo, Paul Bernardo, Robert Pickton, Levi Bellfield, Albert Fish, Jerry Brudos, Henry Lee Lucas and David Parker Ray just to name a few. In all these cases, they suffered turbulent childhoods, from fetishes, to a severe dislike of women, to abusive fathers, to violence against animals, to abandonment by one or both of their parents. Seeing how important childhood is to the development of a person makes me want to make damn sure I’m ready to bring another life into this world. I really did have a great upbringing. My parents were emotionally, and financially stable. I’m not saying that I’m without my flaws because that’s simply not true. Of course events in my life shaped who I am but I was spared any severe deviations and trauma largely due to, I believe, a stable home life.

TV shows such as the CSI Franchise: Miami, New York and Las Vegas tap into this unnatural way it seems that thousands meet their end. While forensics is often the way that serial killers are brought to justice (either with DNA or fibre matches) and linked with their victims, the way that this evidence is miraculously found irks me. Some of the actors annoy me too, most specifically David Caruso (Horatio Cane on CSI: Miami). He is a horrible actor, and the sunglasses and red hair make me nauseous. He is an absolute joke, as you can see from multiple parodies: http://www.youtube.com/watch?v=8NCTUwfTq2I&feature=results_video&playnext=1&list=PL82ADD1E6D99BE672

I know that I cannot be the only one with this unusual fascination with the deviated brain. Criminal Minds takes this idea even further, delving into the psychology of humans on a wide scale. Detective Reid (Mathew Gray Gubler) also provides some delicious eye-candy. Each person is unique and their life experiences aren’t the same, but sometimes some of the story-lines and scenarios I find to be a little far fetched (I know it’s a TV show and for entertainment purposes but still.) I’m sure many people have twisted and violent thoughts in a moment of rage, but there are only a small fraction of those people that actually act on those. People who are able to take the life of another have no empathy for others, and no conscience. This is such an unusual concept for me, as I have always had a very guilty conscience, ever regarding the most trivial of things. I feel bad if I’m five minutes late for meeting a friend for coffee, or having to cancel appointments last minute, whereas psychopaths seem to show no remorse or issue with taking the life of another person.