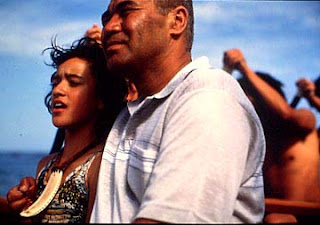 I watched Whale Rider in my first year of university, while taking a Women’s Studies course. The film actually happened to be my midterm exam, we had to watch the film and write a short essay as to whether we believed the film to be feminist or not. It tells the story of Pai, a young aboriginal girl trying to find her place in her tribe. She is next in line to become chief after the death of her twin brother, but her traditional and patriarchal grandfather believes that role is reserved for males only. Her grandfather is devastated with the death of her brother, and angry that he was left with a “worthless” female heir. He disregards her inheritance as chief and starts a school for the local boys and will choose a leader from among them. Pai, against her grandfather’s wishes eavesdrops on the lessons, besting the tribe boys in fighting stick competitions (which only angers him further) and learning all the traditional songs and rituals. Her persistence pays off at the end of the film when her grandfather asks for her forgiveness and she assumes her role as chief. The film is truly inspirational and portrays the difficulty women face living in a patriarchal society.

I am proud to be a woman. In Canada and other first world nations, as women we often forget the rights and privileges that women in other countries are deprived of. We have the right to choose who we get to marry. While arranged marriages occur in Canada, it occurs only in some cultures and the vast majority of women are able to date whomever they would like. We have the right to vote and select which party will be in power in our constitutional democracy. We have the right to an education, which is a major step towards being financially independent and successful in life. "Education is the most powerful weapon which you can use to change the world."~ Nelson Mandela. Many economists believe that much of the world’s poverty could be eliminated with the education of women. Educated women are able to have jobs and better provide for their children, husbands or extended family. These new skills can be shared with others. Jobs promote the economy, further stimulating growth.

It is unfortunate that in some countries (namely India and China) women are not valued the same as men. Due to the one child policy in China to curb the population, families wanted only sons, someone to carry on the family name and to inherit the family estate. The only two options for families are to kill the baby (often drowning them in the rice paddies) or put the child up for adoption and try again to have a son. As a result, the orphanages in China are flooded with healthy baby girls (who through no fault of their own had the misfortune of being born female). This practice has resulted in a deficit of women, which has resulted in woman being auctioned off to the highest bidder because there are not enough women to marry the number of men in China.

As is custom in India before a marriage, the father of the bride must provide a dowry to the husband’s family. This is very expensive to many families, as poverty is rampant in India. Many young girls are abandoned or killed by their families in order to avoid losing family funds. Simply put, girls are too expensive to feed and clothe, let alone marry and therefore in the eyes of many, do not deserve to live. Another issue concerning the desire to have sons is related to religion. Parents believe that they will not reach Nirvana (heaven) unless they have a son to light the funeral pyre. Couples in poverty who already have five daughters will continue to try to have a son, solely for this purpose.

The “Honour killing” of women occurs mostly in the Middle East and parts of Asia. Women are killed because their husbands, brothers or other male family members believe that they have acted in a way that shames their family. Often this involves dating outside their race, having an affair, having a child out of wedlock, or being homosexual. This act of honour killing occurs in mainly patriarchal societies, where the man is the head of the household and has the ability to control women, simply because he is born male. Due to the absolute dominance of men in these societies, women are rendered powerless. Often honour killings are committed with no rational or justifiable reason, such as in 2008 when a woman was killed in Saudi Arabia by her father for "chatting" to a man on Facebook.

I do consider myself a feminist, but not a radical one by any means. I believe every woman should have the right to their own body (deciding who they have sex with, marry, and when they want to have children). They should also have the right to education. The Because I am a girl campaign addresses gender discrimination around the world. Being a woman, and being aware of women’s issues in other countries, I tend to give to women’s organizations and support the female gender. My sponsor child last year was a 12 year old girl from Bangladesh, and all the Christmas shoe boxes I filled were always for girls aged 10-12. I fully support organizations that promote women’s rights and help thousands of girls get out of poverty. Anything that can be considered a woman’s issue should be a human rights issue, and any transgressions should not be tolerated.