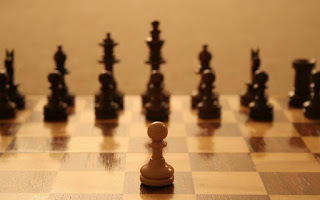 I remember watching this movie for the first time when I was about 8 years old. I fully didn't understand the point of the film, other than the good guy (Joshua Waitzkin) ended up beating the evil-looking kid (Jonathon Poe) in the final game of the tournament at the end of the movie. I was sorta bored by it as chess was never my board game of choice - I've always been a Trivial Pursuit or Clue sort of girl.

My dad had bought the movie for my little brother who has been playing chess since he was 21 months old. He has gone to the provincial chess championships and now 20, still plays avidly online against National Masters and players all over the world. It has always astounded me how my little brother took to chess. He was always a very active child playing every sport imaginable, but for whatever reason he could still down in front of a chess board for hours on end, concentrate and be quiet. And he was good. He won the Under-10 section at regionals when he was only 5 years old. Every year after that he won his age division at regionals (and still has all the medals, pictures and hardware to prove it). The bookshelf in our living room had piles of chess books: 1001 Brilliant Ways to Checkmate, The King's Indian Attack, Chess Tactics and the King's Indian Defence, just to name a few.

My father is a former member of the Canadian Chess Federation (CCF) and I have no doubt that his love of the game is what prompted him to teach my brother at such a young age. He still has a pacifier in his mouth in a picture my mom has of him propped up on a stool sitting at a chess board. A couple Christmas's ago I gave my brother a shot glass chess set. He was estatic. Though my parents preferred if we used egg nog and apple juice in the glasses instead of vodka and beer, it was still fun.

Due to really unusual connections, my little brother had the opportunity to play Canadian Master Robert Hamilton when he was 18 years old, and drew him. He also got an autographed chess board out of the deal which is still hanging on the wall in his bedroom. I read somewhere that chess is an easy game to learn and a hard game to master. Growing up with a dad and a brother that played chess, I ended up learning just due to proximity. I'm nowhere as good a player as my little brother but I know how the pieces move, can somewhat strategize and all the kids at work seem to think I'm a Canadian grandmaster.

I just re-watched the movie and I know this time I took a lot more away from it than when I was 8. There is alot of interesting information about the American grandmaster Bobby Fischer that I overlooked or got bored with before. The footage is old, grainy and black and white which doesn't do much to hold the attention of a younger audience. Josh Waitzkin was no doubt a prodigy. He has published several books about chess but according to Wikipedia hasn't played in an actual tournament in over a decade.

Canada currently has 8 Grandmasters (that is to say players with a rating of over 2500), two of which call the french province home: Alexandre Lesiege (now retired) and Pascal Charbonneau. I watched a documentary called "Smarter than the Rest of Us" which profiled ways in which to make your children smarter. One of the ways that peaked my interest was the implementation of chess into the school mathematics curriculum in the province of Quebec. I don't think it's any coincidence that Quebec now boasts the top math scores in the country as well as two of our 8 Canadian Grandmasters. Chess is entirely math-based: it's logic and strategy and problem solving. Even the way you write games down requires math, using the rows and columns "e4, d5" etc. Chess makes you think; I know after a few games my head hurts because I've been concentrating and plotting each and every move.

I have a new-found respect for chess players. The time and dedication they have to the game is no different than than of any athlete. It requires hours of practice and training and studying. They compete in tournaments regularly and feel the pressure to do well as I'm sure any hockey team does. Unlike a hockey team however, they stand alone. Them versus the chessboard.
Posted by Britney at 6:55 AM