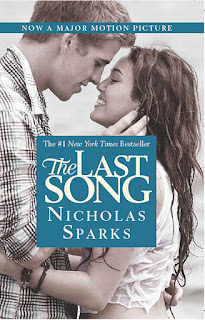 I have a weakness for Nicolas Sparks novels, I admit it. Most people however are probably more familiar with his movies: A Walk to Remember, The Notebook, Nights in Rodanthe, Dear John and the one I most recently watched The Last Song. Miley Cyrus plays the protagonist Ronnie, a rebellious and moody teenager who is forced to spend the summer with her father and little brother. Though I am not the biggest fan of Cyrus, I thought she did a decent job of covering up her southern drawl. It was difficult for me to watch however because I couldn’t stop thinking about her in the role of Hannah Montana. I decided to watch this movie while at home alone one night – a bad decision on my part. As with all Sparks’s works that are tear-jerkers, someone dying is usually involved. At the end of the film, with Ronnie playing the last piece of music her father composed, he finally passes away from cancer.

Death and dying is a natural part of the cycle of life, but that doesn’t make it any less difficult to deal with and overcome. I have always been a very emotional and expressive person. People know when I am happy, sad, angry, frustrated, etc. I have been fortunate to have only had one close family member or friend pass away. I was 16 years old when my grandma succumbed to emphysema and I remember her funeral pretty vividly and how distraught I was. We were never particularly close but seeing my mother all upset distressed me a lot as she always seemed to have herself together. I was only 5 when my grandpa died and I only vaguely remember the reception afterwards and eating the tiny little egg salad sandwiches, sweet pickles and lemon squares that were served.

It’s sad enough when someone dies of natural causes, but something entirely when they are taken suddenly from our lives. Suicide I believe to be one of the saddest things that I have ever heard of. With all the recent coverage of the dozens of teenage suicides, many of them linked to bullying and homophobia, it is amazing how poorly humans can treat each other considering life is so short. I for one am guilty of making my parents lives difficult on more than one occasion, and for many years I resented and wished I didn’t have siblings. I consider myself to be a kind person, but I’m not perfect. I wish I was some days but I’m not. I, along with many teens, was bullied for part for part of Grade 11 by a girl that went on my bus. She was a resident of a local group home, had no doubt been bullied herself and felt the need for whatever reason to single me out. I dreaded getting on the bus every morning and evening after school, knowing she’d be there to taunt me. We didn’t have classes together and we had no common friends so it didn’t last all day. But with that hour a day I spent on the bus, I know how miserable and helpless I felt. The fact that some teens have to have to deal with that all day, from multiple people is absolutely unacceptable. We all deserve to live with dignity and respect, to achieve our personal goals and have a successful and fulfilling life. Any life lost to suicide is one life too many.

People deal with loss in many different ways. Some grieve for months and can never really accept that the person they loved is gone. Others focus on the positive memories and don’t dwell on the sadness, to keep that person’s memory alive. I really don’t know how I will deal with the loss of someone I love, as I never have really had to before. The concept of dying for me is terrifying. It’s something you can’t control. I could die tomorrow in a freak accident or when I’m 80 years old, widowed with 7 grandchildren. It’s this lack of knowing and inability to control it that for me personally is so overwhelming. I can control what I eat, what I wear, my grades in school, the space in which I live. But I have slowly come to realize that there are so many more things that we have no sway over: who we love, how people feel about you, which team is going to win the Superbowl, what the weather will be like tomorrow, etc. I have always struggled when dealing with the unknown. I am someone who loves when things are planned and organized and structured. I am working on this “flexibility” part of my personality but I will never be a go-with-the-flow kind of person.

As odd as it may sound, I’ve already figured out how I want my funeral to be. I guess my logic is that if I can’t control how/ when I will die, I can control how I want my final moments to look. I want to be buried in a white casket, covered in red roses and tiger lilies, my two favourite flowers. I want to be buried with a picture of my family because they are the most important thing to me (all the more strongly recently, finally realizing that they have always been there for me, when most other people turned their backs). I want to have “Remember Me” by Josh Groban playing. The song, while sad has a very positive message in it and I absolutely adore Groban’s voice. I want to be dressed in red, my favourite colour and the colour of my birthstone. I would like some sort of scholarship/bursary to be set up in my name so that there would something positive to bear my name, even years later. I know these things are trivial but hopefully (God willing), I won’t have to worry about this for many, many more years.