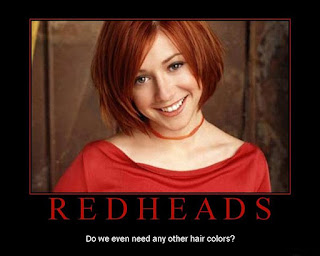 I am a ginger. Admittedly with age my stunning ginger coloured hair darkened, so now I am more of a cinnamon colour, but that is not the point of this blog. Even when I was little I recognized that not many other kids had the same colour hair as me. In fact, redheads make up only about 4% of the population worldwide, the rarest colour by a substantial margin. My favourite Disney princess has always been Ariel from The Little Mermaid, as she was the only one that had red hair. The Little Mermaid also had some of the most catchy and well known songs: Under the Sea, Part of Your World and Kiss the Girl.

Redheads endure piles of stereotypes. Due to the propagation of pop culture, namely several episodes of South Park, redheads are supposed to have no souls. We are all supposed to be short-tempered and crazy in bed with insatiable libidos. I have been hit on by many guys, largely based on the colour of my hair. We are rare and elusive which makes us a hot commodity I guess? In the middle ages, women with red hair were singled out as witches, as they had the same colour hair as Satan himself. They were seen as using their red hair to tempt and seduce men, further propagating the sexual connection to women with red hair. Redheads have a whole slew of nicknames as well, from Carrot Top, to Firecrotch. The whole “does the carpet match the drapes?” has been far too over asked.

Another interesting tidbit I discovered more recently was that there is genetic link between red hair and pain tolerance. Scientists are still working on the exact cause, but for whatever reason, people with red hair have a higher threshold of pain. Redheaded women experience less pain during labour than their brunette and blonde counterparts. While I have never given birth, I can attest to this pain tolerance. I have three tattoos (and hopefully three more to come), two on my back and one on my foot. I nearly fell asleep while the artist was doing the ones on my back and the while the foot is supposed to be one of the most painful areas to get a tattoo, I didn’t even flinch. I remember this even when I was little, being able to endure Indian rug burns, the game of mercy and friends yanking on my hair. That is to say we still feel pain, but we are able to endure more of it I suppose.

Red hair is a recessive gene, that is to say it is a gene that skips generations. Neither of my parents are gingers, nor is either of my siblings. My family roots (if you trace them back dozens of generations) are in Scotland, where my family was a part of the Gordon clan. I have always loved my red hair and can’t imagine having any other colour. I think it’s pretty cool that in the Netherlands, they have a festival dedicated to those with natural ginger hair which lasts two days: Redheadday. I would love to go and take part in the future. Red hair should be celebrated and not mocked. The recent trend of “Kick a Ginger Day” spread like wildfire and although was perhaps initially seen as funny, became just another form of bullying. I was never picked on when I was in school for having red hair – in fact it was just the opposite, many girls told me that they wished they had my coloured locks.

There are also many celebrities that have increased the popularity of red hair (both natural and dyed): Nicole Kidman, Rhianna, Alyson Hannigan, Marcia Cross, Christina Hendricks and Geri Halliwell. Many memorable characters from books and TV also have red hair: Pippi Longstocking, Anne of Green Gables, Daphne from Scooby-Doo, Jessica Rabbit, Yosemite Sam, Wilma Flintstone, Poison Ivy, and the Weasley Family. Blondes apparently have more fun, but redheads are remembered.