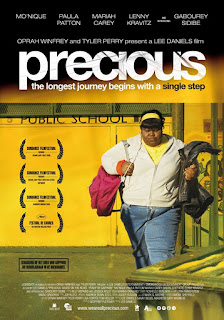 About two months ago I watched the Oscar nominated film Precious. I put off seeing the film for several months because from what I had heard on TV and seen in the trailers disturbed me immensely. I hate to see people hurt, and the visual images of things (animals or people) suffering burn into my brain and I can’t seem to shake it. I love pets and children dearly and hope to have my own eventually. I work with children and have for the last two years, and the thought that anyone could physically, emotionally, verbally or sexually abuse a child breaks my heart. Those people must have no souls and no conscience. I believe children are born a clean slate and that it is mainly the environmental factors that shape who that child becomes. It goes back again to that nature vs. nurture debate again, but that is my belief.

Precious is a victim of sexual abuse multiple times by her father, with whom she has two children (the first of which has Down’s syndrome which brings on more verbal abuse from her mother). She is bullied by classmates because of her weight and learning disability, and the verbal abuse only worsens when she goes home to her mother. Her mother does nothing but degrade her, hurl objects across the room at her, and sit in her chair and bark out orders and various profanities. She takes the anger about her own life, out on her daughter. She holds her daughter responsible for her husband leaving her.

I think I have always been a compassionate person, but only realized more so once I started working within the school system. Children really are the world’s most valuable asset and we must do anything within our means to protect them. I fully support the Children’s Aid Society and have looked into becoming a member. I want to be a teacher so that I can be a positive influence and figure in the lives of children. I was blessed to have had a great home life growing up, with a stay-at-home mom and a hard-working father who were (and still are) best friends. I have no memories of my parents fighting. Not all children are that fortunate. I always loved school and for some children it is an escape from the nightmares at home. They can see their friends and not have to endure the unimaginable things they do under their own roofs.

Every day I get to see joy on kid’s faces, after doing well on the most recent test, finally figuring out that math problem that has stumped them for the better part of an hour, or learning a new way to checkmate their opponent. I love to see them proud and succeed. They are so innocent and naïve about the great wide world out there. I wish sometimes I could go back to being that age – life was so simple and carefree. I’m only 22 and sometimes life is overwhelming; bills to pay, work to go to, friends and family to keep in touch with, budgeting for groceries and maybe a social life and hobbies all mixed in there. I don’t have a husband, or a house, or children, or pets yet but those things will no doubt come in time. Even now, before all these other responsibilities, there still never seems to be enough time in the day to get everything done.

There are many ways to help children, both here in Canada and abroad. Join your local children’s aid and see how you can volunteer/ get involved/ donate. The YMCA, Boys and Girls Club, and Girl Guides/ Scouts of Canada are always looking for volunteers. Samaritan’s Purse does Christmas shoe boxes every holiday season that are sent to third world countries. I did them with my church for several years, filling them with goodies that I had purchased with my own money. Sponsor a child overseas – a year of sponsorship costs around $412.00, less then one month’s rent for me. It’s crazy how much farther our dollar stretches abroad. Most cities have a toy drive around this time of year for less fortunate families. A teddy bear or new book is under $20.00 and will put the smile on the face of a child you have never met.