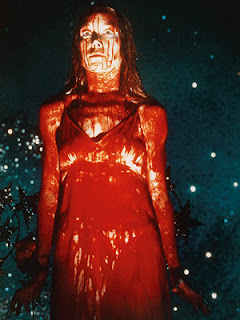 There have been two different versions of the movie Carrie made. The first one starring Sissy Spacek in the lead role came out about a year after the publication of the book of the same name by Stephen King. The other was a made-for-TV-movie released in 2002. I have seen both, despite greatly disliking horror films. The more recent version followed the structure of the book, flipping frequently between the present and past which I can imagine would be hard to follow if you had never read the book. The original film which came out in 1976 followed the story of Carrie White chronologically from the beginning of her getting her first period in the shower to her eventual demise after destroying the entirely of her little town. I enjoyed how the first film in my opinion more accurately portrayed her religiously fanatical mother with all the hidden symbolism (most specifically her final pose in death resembling that of the Jesus statue that Carrie was forced to pray in front of.)

Carrie was the first published novel of the great American horror author Stephen King. He has been my favourite author since I was 14 years old. My Nana’s (dad’s mom) always had an entire bookshelf covered in his novels, but my mom discouraged me from reading them as she knew how poorly I responded to horror films. In Grade 9 however, I needed to pick a book to do a book report during the winter semester. I wound up stumbling across a yard sale and a beaten copy of Firestarter by Stephen King. It cost all of 50 cents so I figured even if the book was garbage; I hadn’t spent a large sum of money on it. Firestarter (also a movie starring a young Drew Barrymore) wound up being the best book I had read in a long time. It was an intriguing story about a little girl named Charlene (Charlie to her father) who had the uncanny ability to start fire with her mind, often when she got angry. She and her father were on the run from a group of scientists who her father feared were going to capture her and perform experiments on her, to test her limits and treat her like a lab rat. After that, I was hooked. I checked out Christine, Rose Madder and It from my high school’s library the day I handed in my book report.

Paranormal activities, the supernatural and the unknown are all common trends in works of King. While Carrie is telekinetic, Charlie is pyrokinetic, Christine is a possessed car, Salem’s Lot is about a town gradually all becoming vampires, It is about a murderous clown that haunts a group of children, Needful Things has the devil as a shop keeper who sells people’s lives for pennies, and The Tommyknockers has an aspiring writer who is able to channel vibes from the alien spaceship she discovers in her yard. I have read all 56 of his novels, with the exception of his three most recent ones: Full Dark, No Stars, Lisey’s Story and Duma Key. His autobiography On Writing provides a very enlightening account of his early ventures into writing. “If you don’t have the time to read, you don’t have the time or the tools to write,” is my favourite quote from the book. His persistence at becoming a published author was absolutely admirable – even he, the great Stephen King received thousands of rejection slips from magazines and publishing companies.

Mr. King also didn’t have the easiest life growing up. His father was out of the picture at a very young age and he was raised by his mother who worked multiple jobs to put food on the table. He was an awkward and goofy kid in school, but he was well-read and well-educated and for that, the other kids respected him. He did his degree in English at the University of Maine, where he would meet his future wife Tabitha Spruce. Although a certified teacher, he was unable to find work and wound up having to work several garbage jobs, including at a laundromat just to prevent the heat from being turned off. He continued to write, getting articles and short stories published in Playboy, Cavalier and other men’s magazines. King and his new wife were juggling two young children and were barely making ends meet when he finally succeeded in getting his transcript of Carrie approved for publication.

The publication and success didn’t remedy all his problems however. With money came access to drugs. For many years King was heavily addicted to cocaine and alcohol. In his autobiography he wrote that he had no memory of writing Cujo (one of his favourite novels) because he was so intoxicated. He truly is a fascinating character and a wonderful author. For those of you who haven’t watched it yet, you should have a listen on YouTube with Stephen King bashing Twilight author Stephenie Meyer, it’s absolutely hilarious. When a man of that caliber and experience level says you’re garbage, you likely are. He has read more books than I’m sure most people could even imagine and as an acclaimed and decorated author, he has penmanship and writing skills oozing out of his pores. I would love to get a chance to meet him and have him autograph a copy of either Christine or Needful Things (my two favourite books). I have been to Maine (the birthplace, current residence, and state where the vast majority of his books take place) and would love to go back.

One of the most useful writing tips I took away from King’s autobiography On Writing was to write about what you know. This blog pertains to things in my life that I know only all too well. You won’t be seeing blogs about football, the economic crisis or computers I’m afraid. When people write about things they know nothing about, it shows.