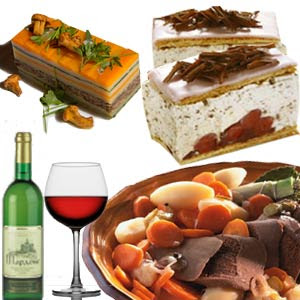 The film Julie and Julia which came out in 2009 starring the wonderful Meryl Streep and the delightful Amy Adams has encouraged me to venture into the world of French cuisine. I am very proud to be a francophile (that is to say a lover of all things french) - I even dressed up as a Parisian woman for Hallowe'en this year.

I majored and minored in French in university and it was there that I was exposed to this unfamiliar and fascinating world. I am a great admirer of French artists from Jacques-Louis David to Renoir to Délacroix, as well as the great french composers including Les Six. I believe the french language to be one of the most beautiful in the world and I am a proud speaker of it. I went to France just over 4 years ago with my high school as part of an EF tour. It was enjoyable but that being said, we spent alot of time doing things that I personally did not find terribly enjoyable ie: lots of shopping excursions. I would have preferred to see la stade Roland Garros (where my favourite tennis player Rafael Nadal has won the French Open more than 6 times in the last 10 years) but it was not to be the case - which has only heightened my desire to return to the city of lights (Paris). Watching the movie has rekindled my desire to learn something new (as I am taking the year off from university to work) so I would like to attempt to try some basic French recipes.

Growing up, my mom always made dinner. She was the traditional housewife and my dad the traditional breadwinner. She is a wonderful cook, and now at the age of 22 I wish I had helped out more in the kitchen. She never made anything my dad didn't like, which included anything spicy or anything terribly exotic; my dad is a meat and potatoes kind of guy. I love food and always have. That being said however, I can cook merely the basics - pasta, grilled cheese, anything from a can, eggs and toast, chili, beef stew, etc. The venture into french cooking I believe will be challenging but very rewarding and will only help my cooking exploits into the future. I enjoy eating and a enjoy food and wish that I had the time and money to take some cooking classes.

These last couple of months have been a relatively tumultuous time in my life, having moved to two different cities caused much unrest and turmoil, as well as splitting up with a longtime boyfriend. Now, relatively alone in a new city I have been working part time at a job which I love, but the lack of hours has left me with spare time to pick up some new hobbies which has prompted this adventure into the world of French cuisine. If I am to believe what the movie has told me, French cooking requires the use of a lot of butter, cream and eggs.

This is also my first attempt at blogging - which a website suggested was another inexpensive hobby that peaked my interest. I am an avid reader and have been since I was 5 years old, but unfortunately I don`t feel that I write enough. I did my university degree entirely in French so I haven`t written anything of any length in English since I was in high school. Due to the fact that I am someone who loves to be busy rather than bored, I have made it my mission this month to try new things, namely new hobbies. Currently I attend the gym at the local YMCA and play recreational badminton every Tuesday. I would like to pick up painting or another artistic venture such as photography - I'm not particularly good at art but I find it fun and very relaxing. I have also decided this month to try Nanowrimo, where one tries to write an entire novel in a month (about 50000 words). I don`t know how successful I will be, but if I can manage to keep up with my blog all month I think I will be able to walk away with a sense of accomplishment. I think trying new things and making myself busy will not only prevent me from sitting with my own thoughts, but will also help to make me a more rounded person.

I am someone who constantly has things on the go - in high school I participated in multiple extracurricular from tennis to Reach for the Top to the international club. Now that I`m done university, I have lost access to all the clubs and groups I was once a part of. I now have the added challenge of meeting new people and trying new things in a new city.

I know that I am an anomaly - I can`t imagine there are very many French speaking anglophones out there who have dedicated themselves this much to the French culture, so I really have no clue how many people would even follow this. If anything maybe they stumbled on it by pure chance and it will insprire them to try something new in their life.
Posted by Britney at 6:08 AM