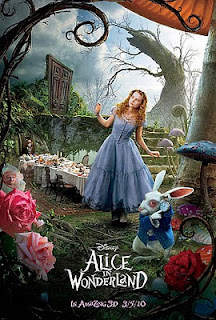 The majority of people will recognize the characters of the Mad Hatter, the March Hare, the Red Queen, The Walrus and the Carpenter, the Cheshire Cat, Tweedledum and Tweedledum and the White Rabbit. Most could probably name the film or novel that the characters belong to as well – Alice in Wonderland of course. I have seen 2 different film versions of the book by British author Lewis Carroll; the classic Disney version with the usual catchy songs (ie: Painting the Roses Red) that was released in 1951 and the version by Tim Burton that came out in 2010. The children’s book full of anthropomorphic animals can easily capture the imagination of young readers, but is still a wonderful and fantastical tale for adults to relive. Both films do not stay 100% true to the literary text from which it is derived, which I suppose is common in most cases when changing mediums. They have added and omitted events and characters but the core of the story remains the same.

Alice’s age is never stated in the Disney film, but she is able to daydream this entire world of Wonderland. Oh to be a child again. They have such wonder filled and expansive imaginations. Their ability to create has no boundaries.

The version directed by Tim Burton is far more fantastical than that of Disney in my opinion. Not animated, the movie has to rely on incredible costumes and makeup to recreate this magical land and characters (which also garnered them a Best Costume Design Oscar).

I have been a huge fan of Tim Burton for several years. He is unique and bizarre, which makes him memorable. I remember a few months ago I was watching Burton’s remake of Willy Wonka and the Chocolate Factory in the family room. My mom came in, took one look at the screen and asked, “That’s by Tim Burton isn’t it?” He has such a style that it makes any of his films recognizable. Even his live action ones tend to resemble the animated ones. Having watched a solid handful of his movies: Sweeney Todd: The Demon Barber of Fleet Street, Alice in Wonderland, Willy Wonka, Edward Scissorhands, The Nightmare before Christmas, and 9, it is easy to pick out the commonalities between them. Johnny Depp stars in the majority of Burtons works – playing the title character in Edward Scissorhands, Sweeney Todd, and Willy Wonka – and playing the secondary role of the Mad Hatter in Alice in Wonderland. Burton’s partner of many years Helena Bonham Carter (Bellatrix Lestrange in the Harry Potter films) also appears in his films; the wife of Sweeney Todd, The Red Queen, and Charlie’s mother Mrs. Bucket. His movies tend to have dark themes but they are also fantastical. The man is undoubtedly a genius, and I was excited to hear that a Tim Burton balloon would be unveiled at this year’s Macy’s Thanksgiving Day Parade in the United States. I unfortunately missed out on the Tim Burton exhibit that was being held to showcase TIFF (Toronto International Film Festival). That would have been absolutely incredible to witness and grab some photos of. The “twisted, nightmarish, and dark” world of Burton is what sets him apart and has contributed immensely to his success.

In a world of millions of people, making a name for yourself and distinguishing your identity can be difficult. I like to go against the grain, against what is out there. I would rather be overly ridiculous than overly boring and have people forget me.