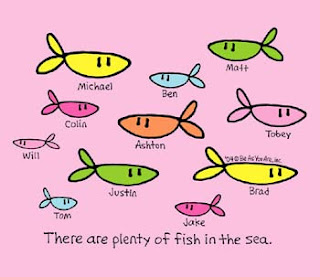 I have an account on an online dating site and up until about three weeks ago I was on the site regularly. Gasp. Most people are pretty surprised when I tell them that, largely I think because I'm very extroverted and have no problems meeting new people. I guess my issue is that I don't like dating people in my social circles because of the drama and problems it can cause if things end badly. I also like the idea of being able to pre-screen someone before I meet them, as I tend to be on the picky side.

I first joined Plenty of Fish (POF) right before my nineteenth birthday. I had just completed my 1st year of university and I was working full time at a landscaping company for the summer. The very first guy I met off the site I ended up being in a relationship with for nearly two years. I'm not entirely sure what stars aligned that day, but it was very quick and within a couple of weeks we were a couple (Facebook official and everything). Another random tidbit: I have only ever dated one person that I didn't meet online.

I had tried another online dating site, OKCupid.com, with minimal success. I wound up meeting Mike, Scott and Stephen off that one, the latter of whom remains a friend. I have met a pile of people off the internet in person.The scary part is that I'm sure I can still name them still (cursed long term memory): Marc-André, Justin, Andrew, Andrew, Kyle, Paul, Tim, Marc, Kevin, Charlie, Shawn, Mike, Greg, Brendan, Clint, Christopher, Rob, Yannick, Ryan, and Michael. I obviously did not end up dating them all (and keep in mind that I met all these people over a three year period). In fact only a handful ever saw a second date. Most of the guys that I have met wound up being duds.

Oh the joys of online (and free) dating. Virtually anyone and their dog can make an account and post pictures. Alot of people also sign into the site with a pile of emotional baggage that you end of finding out about later on. This of course made me head for the hills. There are also guys who come across as interesting via text, and you meet them in person and the food on your plate is more interesting than what they are talking about. I like to consider myself a pretty interesting person - largely because I have alot of interests: I love reading, badminton, tennis, trivia and yoga, but I also have other hobbies like crocheting and blogging and taking pictures. One of the guys I met worked a full time job...and went to the gym - that's it. I was bored senseless.

The idea of meeting new people has never been a daunting one for me, which I suppose is part of the reason I have met so many guys in person after first crossing paths online. Job interviews don't really phase me either - it's like having a conversation with someone. Being an extrovert, I feed off other people's energy and its far more exhausting for me to be alone, than for me to be surrounded by others.

While I acknowledge that online dating isn't for everyone, it is a great medium to meet people who you would have never crossed paths with otherwise. For those of you who are toying with the idea of creating an account and perusing through hundreds of profiles should consider a few things.

1) In the space where you have to write about yourself and your ideal partner be as through as possible. Do you want someone who is the life of the party? Or would you prefer to date someone who is more of a homebody? Someone educated? Athletic? And describe yourself in the same way. Are you a family person? Independent? Love all the creature comforts? Highly religious? All of these things will help guys figure out who you are and what you're about (which also cuts down on morons messaging you).

2) Post only recent photos of yourself (within the last 3 months). Use photos that are well lit and show a bit of your body. There is no point hiding what they will eventually end up seeing in person if you meet.

3) Keep it on a first name basis (aka no adding to Facebook until after you've met.)

4) Meet in a public location (coffee shop, library, restaurant, etc). This is for your personal safety. Every person I've ever met offline was exactly who they said they were, but it never hurts to err on the side of caution.