Top 10 Things That Scare Me

mercredi le 18 juillet 2012
Being someone who has always been a relatively anxious person, perhaps I have more fears than most, but I thought 10 was a solid number, so here they are – my greatest fears…and no one better take advantage of this >.< 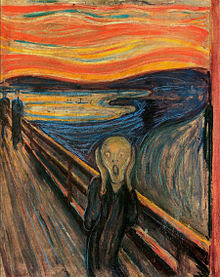 1)     Death/ Dying prematurely – until relatively recently this fear didn’t really surface. It was only after I was diagnosed with G.A.D. that this was the underlying cause for much of my anxiety. The idea of not being able to control when and where your life will end is a crippling fear for me. It’s not even so much just the thought of me dying, but also the possibility of having those closest to me pass away that is terrifying. I know it will happen eventually, and I have no doubt my reaction will be far from pleasant. I hate change, and death is a permanent change that you can’t undo. Most of the time I’m able to keep these thoughts at bay by keeping my mind busy and not allowing myself to dwell on these thoughts. I’ve already written a full-length post on this topic so feel free to read that…I won’t waste my time re-writing it and repeating myself.

2)     Being Alone – not just being alone in the sense of being home alone, but also being alone in life aka without a partner/husband/significant other. As a huge extrovert, I thrive around people and loathe being alone. While time isolated is both necessary and healthy, I don’t particularly enjoy it. Even as a child when I had to spend time alone, I would often talk to my mirror or my stuffed animals. Who am I kidding? I still do that :P

3)     Sharks – my fear of sharks started when I was 8 or 9 years old, after watching the movie Flipper. Yes, I know Flipper is about a dolphin and is also the source of my crush on the actor Elijah Wood, but back on track. There is a hammerhead shark aptly named Scar in the movie, and in a particularly vivid scene that I still remember over a decade later – the protagonist mistakes a dorsal fin gliding through the water for that of Flipper, when it is actually Scar. For nearly a year and a half after watching that film, I was terrified to have any part of my limbs dangling over the bed for fear that a mouthful of teeth would chomp them off. I remember having to go to the washroom in the middle of the night, and launching myself as far away from the bed as possible so that the “shark” that lived under the bed wouldn’t get my feet.

4)     The Dark – it isn’t so much the dark that scares me, it’s what is in the dark – the unknown. I remember having frequent night terrors as a kid, thinking that there was some big scary man lurking outside my window waiting for me to fall asleep so that he could pounce. These thoughts led to many sleepless nights as you can very well imagine. Watching countless episodes of American Justice, Cold Case Files led to multiple panic attacks thinking that I was going to get attacked and murdered in the shower or at night. I have always have had an overactive imagination and the fact that those TV shows were based on true crime cases didn’t help quell the horrible scenarios in my head.

5)     Horror films – I have always been a visual person. I believe what I see, so when I see one of these films logically I realize that they are filming it on a set somewhere with actors, but because I visually see it – I am unable to shake the images in my mind. Coupled with ominous music, horror movies have been the cause of many nightmares. I have only ever seen maybe half a dozen horror films in my entire life – including 28 Days Later and FearDotCom – almost all of which were at slumber parties when I was in my early teens. I have never been much of a fan of being scared. It’s not an emotion I’m a fan of. I tend to watch mostly comedies. I love laughing and am very easily amused…plus reality can be scary enough at times, having to constantly hear about the terrible things happening in the world (ie: war, child soldiers, honour killings, serial killers, pedophiles, etc.)
6)     My boyfriend lol…. While I am not serious about this one, a couple of my friends have claimed that my boyfriend scares the hell out of them :P No idea where this one comes from, but a friend of mine claims he has a “dark aura”…whatever the hell that means. Meh, I adore him anyways…despite the pain in the ass he is

7)     Failure – a pretty common fear I suppose, though this one doesn’t surface very often. I hate failing at anything, whether it’s a test I studied hard for, or getting a new job, or perhaps the newest romantic conquest. The feeling of inadequacy is not a pleasant one, and I’m sure I’m not the only one who has battled feeling like they weren’t good enough. I want to be successful and the thought of not being able to reach that goal scares me.

8)     Losing / Forgetting Things – While this has rarely ever happened to me, the thought of forgetting my keys or wallet or perhaps a doctors appointment has struck my sub-conscious during dreams. I have woken up in a cold sweat in a state of panic thinking that I have forgotten to study for a final exam that morning, when in fact there was no such thing. There is also that mini-heart attack that occurs when I cannot find my cell phone.

9)     Fire – While I love candles, the thought of leaving burning candles unattended fills me with anxiety. Ironic I know, when people light candles to relax, and in my case it just ends up stressing me out more. Even when I know that there is nothing in the immediate vicinity that can possibly catch on fire, my imagination goes to work again and thinks up the worst case scenario. I’m not even entirely sure where this fear comes from – I’ve never had anything catch fire before, or had a house burn down.

10) Aging/ Growing Old – How very appropriate considering today is my 23rd birthday. I have often been told that I look young for my age, and I’d prefer to keep it that way. However, like almost everything on this list, aging is something I can’t control. The thought of being wrinkly and saggy one day both disgusts and saddens me. I know it’s a gradual process. I know I won’t wake up one morning 25 years older but the thought of my body and mind changing with age is a disturbing thought. I recently watched the movie Take This Waltz where the theme of the movie was “The new always becomes old.” While this was pertaining more to the romantic plotline of the film, the theme holds true with the human body. New relationships eventually lose their excitement and skin loses its firmness.
Posted by Britney at 5:16 PM