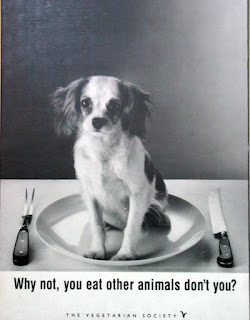 This novel is the most recent one that I have completed, documenting the treatment and slaughter of animals (namely cows and chickens) in the United States. It was incredibly enlightening and disturbing. I was also pleasantly surprised as well to note that the novel has a philosophical slant, asking questions like:

Why do we eat cows and pigs, but not dogs?
What does free-range and organic mean?
Why do we justify the slaughter of animals? Purely for the taste?

The author Jonathon Safran Foer is himself a vegetarian and has many convincing arguments, justifying his choice of diet. While I live in Canada, the evolution of the farming industry in the US is astonishing, with over 99%of the meat coming from factory farms: animals living in unhumane and unsanitary conditions, unable to access the outdoors, and pumped so full of chemicals that the consumption of these animals is hindering human medicine to cure certain ailments.

I wasn't particularly aware of the proximity of humans to animals, but when you're consuming them on a regular basis you sort of become immune to it. The Spanish Flu that decimated an incredible number of people was a type of avian flu.

Other reasons to support a vegetarian or vegan lifestyle include reducing the effects of global warming (animal agriculture is the biggest culprit) and discontinued support of these factory farms and slaughter houses. They continue their practices because people continue to purchase the meat from them.

I was a vegetarian for a couple of years, a couple of years ago. It wasn't for health or moral reasons at that time. Now I have very real health concerns about the consumption of meat, and I will resume being a veggie again.

For those skeptics out there, pick up a copy of the book and educated yourselves. Or watch "Meet your Meat" http://www.chooseveg.com/meet-your-meat.asp People are in denial about where their meat comes from, making consumption of it far easier. Family farms are no longer the rule, they are the exception. To keep up with the demand of consumers, corporations have turned traditional farming into a production line, compromising both the quality and the health of meat being produced.