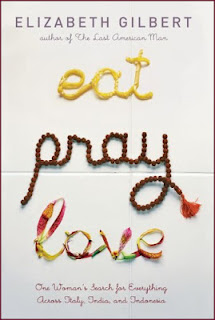 This is the most recent novel that I completed. As cliché as it sounds, it really is an incredible novel. Told through the eyes of a thirty some year old women who is going through a painful divorce and is attempting to rediscover herself by traveling to three different areas of the world (Italy, India and Indonesia). What really struck me about this book was the similarities between Elizabeth Gilbert (the author) and myself:

a) a love and passion for a foreign language and country (Italy for her, and France for me)
b) being a control freak
c) being a devoted yogi (practicer of yoga)
d) recently having a long term relationship ending (yes I know a divorce is not anywhere close to the same as what I went through, but many of the same emotions are there: anger, sadness, etc)
e) the same birthday: July 18th (this I found very eerie when I discovered it in one of the last chapters in the book)

The book is divided into three sections - one for each country that she visits. While in Italy most of what is mentioned is all the culinary delights she discovers while there. The descriptions are enough to make your mouth water and want to reach through the pages and devour what is in front of the author. I've never been to Italy but want to visit eventually. My passion has been French and anything French-related for many years. If and when I ever have the funds, I would love to spend 4 months in France and do nothing but enjoy all the French cuisine from all over the country. Dishes vary depending on the region you are exploring. While in Italy, Ms. Gilbert also signed up for Italian conversation classes as a way to better communicate and enjoy her stay overseas. I am already fluent in French and would love the opportunity of several months to do nothing but eat and explore the amazing country that has captivated me for years.

While in India, Ms. Gilbert endured hour upon hour of meditation and self-reflection at an ashram (a more or less glorified yoga school). The idea of attending one of these meditative schools is very appealing to me, but apparently the criteria for admission is very difficult to obtain. Reading this section was very much like a mirror looking into my brain. I have always had an overactive brain and a wild imagination...which is hard to keep at bay. Having a calm mind is a constant challenge, which is why I go to yoga classes three times a week...to keep me sane and allow my brain an opportunity to void itself of thought, even for 10 minutes at a time.

While in Indonesia, the author met the man that she would eventually call her husband, completing the title of the novel with the final section - Love. What she learned during her time in Italy and all the self reflection that she underwent in India allowed her to fall in love on her own terms, not out of desperation or the need for a man in her life.

The novel is an awesome read. I greatly enjoyed Ms. Gilbert's writing style and her witty comments thrown in randomly. Her frank and forward way of speaking is something that I admire and it felt like either a very blunt best friend recounting their life, or perhaps your conscience, telling you things you really didn't want to acknowledge about yourself.
Posted by Britney at 8:37 PM