The whole world has been thrown into chaos since March 2020 with the COVID-19 virus. One of the few things that has helped me keep my sanity has been the Harry Potter series. For the last few months I have been re-reading the books and rewatching the movie series (a couple of times). While very nostalgic because I was the same age as Harry as the books were released, they have also offered me something that I can be sure of and anticipate what is going to happen.

In the spring I finished a Harry Potter cross-stitch for my classroom, thinking we would be returning in a few weeks. This did not happen. Pattern available from HardKnotLifeStudio on Etsy. Pattern: Muggle Teacher. I added the different house scarves around the outside because I felt there was too much blank space on my white aida cloth. 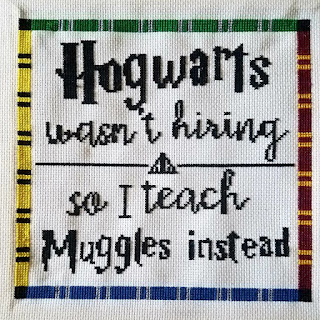 My most recent project has been to knit my house scarf. Several years ago I went on Pottermore (now the Wizarding World) and got sorted into Ravenclaw. Admittedly I should have known that it would be my house, given that the three adjectives that describe Ravenclaws are Wisdom, Wit and Creative. Sadly there are not many Ravenclaws represented in the books outside of Cho Chang, Luna Lovegood and Filius Flitwick. However I am proud to represent a house that isn't Gryffindor. 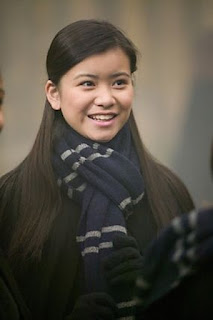 Frustratingly the colours of Ravenclaw in the book are blue and bronze, while in the movie adaptation they are blue and silver. So when I went about looking for yarn colours for my scarf, I opted for the movie colours as those were the ones that were visually seen by audiences and therefore the most recognizable. 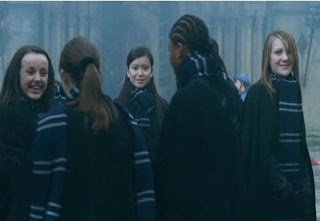 There were many patterns for Ravenclaw house scarfs, but I opted for the ones seen in Prisoner of Azkaban, with the smaller alternating stripes (which seemingly are worn by upper year students) rather than the large block striped scarf seen in the Philosopher's Stone. This was the free pattern I ultimately settled on (but made my own adjustments as noted below): https://svyet.wordpress.com/2010/10/10/harry-potter-prisoner-of-azkaban-gryffindor-scarf/

Obviously I changed the yarn colours from those of Gryffindor to those of Ravenclaw. I opted for three skeins of Dark Country Blue and one skein of Grey Heather from the brand Caron: Simply Soft. 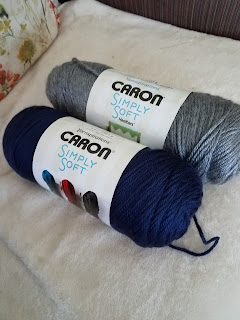 I particularly liked this pattern because it is done on circular needles, so you just knit all the way around, creating a wide tube of stockinette stitch. There is no counting individual stitches, no purling; you can just put your mind on auto-pilot and away you go. You do have to count the total rows as you knit to ensure your stripes are the same size, but it is a very easy project to do while watching Netflix. 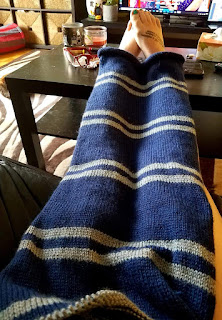 The original pattern featured a photo of a scarf with 14 secondary colour striped pairs of lines, but I stopped mine at 10. I stand about 5'5'' and even then the scarf was taller than me and therefore plenty long enough. Because I made my scarf a little wider, it is a pretty thick and hefty garment. Knitting in the round creates a tube of knitting, so to finish off the open ends, I added tassels. Because grey wasn't the main colour, I opted to alternate blue and grey for the fringe. This was pretty simple to do with the help of a crochet hook. I used four pieces of yarn for each piece of fringe. 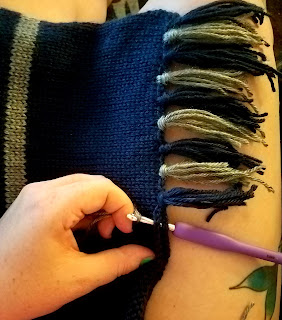 In total this scarf took me over 70 hours to knit. While incredibly time consuming, I am thrilled with the final result :) 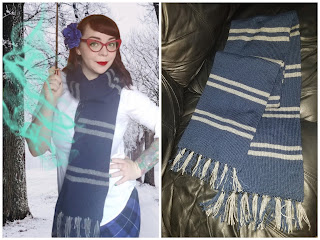